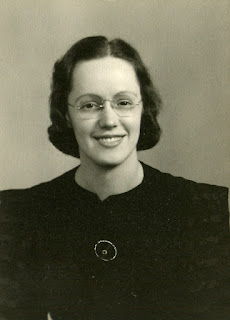 My parents grew up in the early 1900s.  (I was a late-in-life baby).  As a result, I know many of the "old ways" passed down from Mom to me...canning, cooking, slaughtering chickens, sewing, driving a stick shift....etc.

One of the adjectives I'd assign to Mom would be Self-Reliant.  She was also kind, patient, fun-loving, and flexible....but her self-reliance was something many folks wouldn't see readily.

My step-mom, whom I refer to as Mom, raised me after my mother died in a car accident (when I was 5).  She and Dad married when I was 8.

This is Mom's mom taken on their family farm back in 1910.  Back then, the chickens and ducks ranged free around the house and roosted in the trees at night.  They were farmers, and had just a few livestock for their own use.  The land was used to raise hay and grains for the local communities, and their front yard was used to plant vegetables and flowers.  Mom's mom inherited the land from her father.  He came the Central Ohio in the mid 1800s and bought several acres of the rolling terrain which was well-suited to farming.  Before he died, he divided his land between his two daughters, and moved in with Mom's family to spend his remaining years. 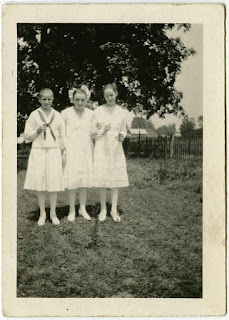 Nellie was sent to finishing school (something like high school) when she graduated from their one-room school.  But, by the time Mom got old enough to leave for finishing school, times had gotten tough, and she had to stay on the farm to help.  Her older brother, Charles, had died from falling from a tree goofing off, and her grandfather had died from a farming accident.  Mom always resented not being able to go to finishing school, and I think this really affected hers and Nellie's relationship for years later.
The farm had become too overwhelming for many families during the War (WW1), and her family sold the farm and moved into town (the county seat).  Mom's father got a job as the grounds keep for the fairgrounds, and Mom got a job, too, at what is now know as AT&T.  Nellie worked at the newspaper, and got married to a barber, Ross.  They started their new life, then Mom's dad was shot one night while making his rounds in the fairgrounds.  He came across a group of rough and drunken men conducting an illegal poker game, and was found dead in the cattle barn the next day.    Her mom had a stroke subsequently, and Mom took care of her during the days, working the night shift. She lived with her mom for many years until her mom died.

Mom went on, buying a house with money she saved while working.  She bought a car, and carved out a nice life for herself in an era where women were 2nd class people.  She had a long-term boyfriend while she lived at home with her mother, but they never married.  They would go to the dance halls to listen to the famous Swing Bands of the day, and had lots of friends and fun times.  But, he died of a sudden heart attack before he was 40.  She didn't marry until she met Dad at age 51.  This is when she became my mother, and it was one of the best things that ever happened to me.