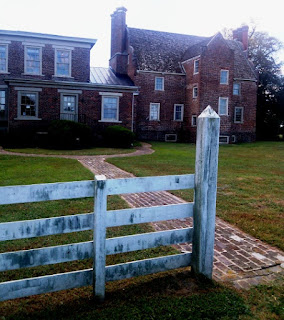 Lee an I are trying to visit sites nearby to become more familiar with our new home here in Southern Virginia.  So, a few weeks ago, we took an afternoon ride in the country and passed by a large sign stating "Bacon's Castle, turn right"....so we did.  Luckily, the museum of of Bacon's Rebellion was open and we took the tour.  Wow!  This place is really, really old.

This house of Jacobean design was built in the 1665 by Arthur Allen and his wife Alice, a wealthy merchant.  His son inherited the house and was a member of the House of Burgess.  This was "the frontier" and Indian raids were a problem that the settlers wanted the Governor to deal with, but he refused to make the effort, and some of the affected landowners, led by Bacon, decided to take the fight to the House of Burgess.  This is known as Bacon's Rebellion, and during said rebellion, Allen's house was taken over by Bacon's men.

This house has been remodeled and added onto by subsequent owners, but its much the same as it was.  Quite interesting architecture and building methods.  Here are some pictures of a few of the property's fences....Enjoy.